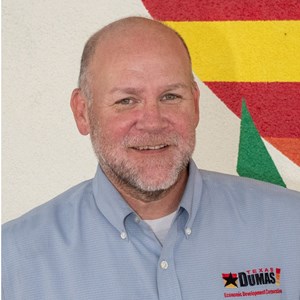 Born and raised in Minnesota, Mike attended the University of New Mexico where he obtained a degree in Business Management and Political Science. Mike has served as a ranking police officer, Fire Marshal and City Manager in New Mexico prior to accepting his current role as Economic Development Director. Mike and his wife Radna have two daughters, 7 year old Dylanie and 21 year old Devan who is attending Texas Tech. Mike and his family are a rodeo family and enjoy traveling and serving their community. Mike is recognized as a leading economic development professional in Texas having been in his current position since 2008. He and his wife own and operate Moore Services, an overhead door, glass and windshield business.